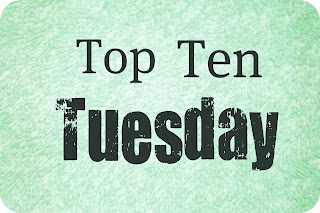 When I first saw this topic I was a bit afraid I wouldn't be able to think of ten people. But it was a lot easier than I thought! I decided to go for people who still live, because otherwise this list would be almost endless!
Leave me your links! I'm curious what you chose! J.K. Rowling
Harry Potter is one of my all time favorite series. I've reread it up to seven times (HP 1-4). I just can't get enough of it! I would love to talk to J.K. Rowling about this series.
Mary Hoffman
I love Italia! The country, the cities, the culture, the food, the language, everything! The Stravaganza series is set in Talia, a country that looks like our Italia. And I love this series and I would really like to talk to Mary Hoffman about it!
Sophie Kinsella
My favorite Chick Lit author. The first question I would ask her: what's the secret to your success?
Brigid Kemmerer
My new favorite series! (I know a lot of favorites today ;)). Her books are full of tensions, funny moments and hot guys! It's amazing! I would love to know where she gets her inspiration!

Lili from Lili's Reflections
Lili gives amazing recommendations. I've only spoken to her via twitter, but I would love to talk to her in person, about books of course! I love her new blog design!
Amber from Books of Amber
I love her blog! She's my biggest example in the blogging community! in my eyes she's pretty much an expert in blogging and I would love to talk to her about it!
Jessica from Chick Lit Teens

Chick Lit Teens was the first blog I started following and it was one of the reasons I first thought about starting my own blog.

The covers from Harper Teen are always so beautiful! I'd love to know how they design these covers and where they get their inspiration!
Editors from McMillan
After being an intern at a Dutch publishing house for seven months I know how books are made. I know publishing is different from publisher to publisher and from country to country and I'm interested in their approach. I love their books!
Wiebe Buddingh'
A lot of people will think: who? Wiebe Buddingh' is the Dutch translator of the Harry Potter series. I've always been interested in translations and how translators approach original texts. But Harry Potter is special, because of all the names. Hermione for example became Hermelien. The reason is that Hermione wouldn't be pronounced correctly by Dutch kids, but why Hermelien? Almost all the names have been changed and I'd love to hear why and how he did it!